If retirement means a prolonged period of leisure with a standard of living similar to that of one’s pre-retirement days, this “dream” looms too distant for many middleincome employees near retirement age in Hong Kong. It reflects that the city can work more on setting up an adequate and sustainable retirement system, which allows retirees to achieve their retirement goals in the future.

In Hong Kong, most of those who retire at the age of 65, when employees can collect what they have accumulated in their MPF accounts, will find that they cannot reach their retirement goals since the bridge is too far. Retirees in the city have to settle for a somewhat substantial reduction in the standard of living if they rely mainly on the retirement protection system’s existing pillars.

The Hong Kong Retirement Schemes Association (HKRSA) conducted a study in collaboration with the Felizberta Lo Padilla Tong School of Social Sciences at the Caritas Institute of Higher Education and the Sau Po Centre on Ageing at The University of Hong Kong, to investigate the retirement prospects of the middle-income employees in their later stage of career, and their worries. The study exposed the stark reality that most middleincome employees have to face in retirement. Regarding middleincome employees, we defined them as the 25% of all employees who earned immediately above the median monthly income, i.e. between $18,000 and $30,000 a month in 2019.

Firstly, we looked at the replacement rates afforded by the existing pillars of the retirement protection system, assuming that the employees have made a careerlong MPF contribution. We found that our system, including all pillars, could only provide about 40% to 50% of the original income of the middle-income employees. This suggested that it is hard to maintain their original living standard unless they have other assets that could generate additional income.

Next, we reviewed the household expenditure pattern at different income levels. We found that, on average, an elderly person (aged 65 or above) spent about $12,800 a month in 2014/15 (or $14,000 in today’s price) if they could maintain an above middle level income (25% of all the households with income immediately above the median household income). Since most of the current Hong Kong retirees do not have a stable pension income, they are unlikely to be able to maintain their income status, which means their household income will be reduced.

If we looked at the lower-middle income households (25% of all the households with income equal to or immediately below the median household income), we found that on average, an elderly spent approximately $8,100 a month (or $8,900 in today’s price). This is also what the current retirement system is likely to provide the retirees with middle level income before retirement (Table 1).

Worries go beyond standard of living

Moving down in income position and living standard are probably expected by the retirees, and this view was expressed in the survey conducted with the 222 respondents as well. Reduction in standard of living upon retirement is a fact they have to reckon with, but their worries are beyond the standard of living. Deteriorating health conditions and increasing housing spending also ranked high in the list of their worries.

In fact, among the elderly households, housing related expenditure was the single largest spending item regardless of their household income position. In our sample, more than half (51.8%) of the respondents lived in the flat they or their family members owned, while 34% lived in public rental housing. The high amount of housing related expenditure such as rent (if applicable), renovation, management fees, rates, land rents, in addition to fuel, electricity and water, were up to $7,000 a month in 2014/15 on average for elderly household (households whose members are all aged 65 or above) belonging to the middle-lower income category. Since the average included those living in public rental housing with much lower related expenditure, the housing cost were higher for those living in private homes even if they had already paid up their mortgage. 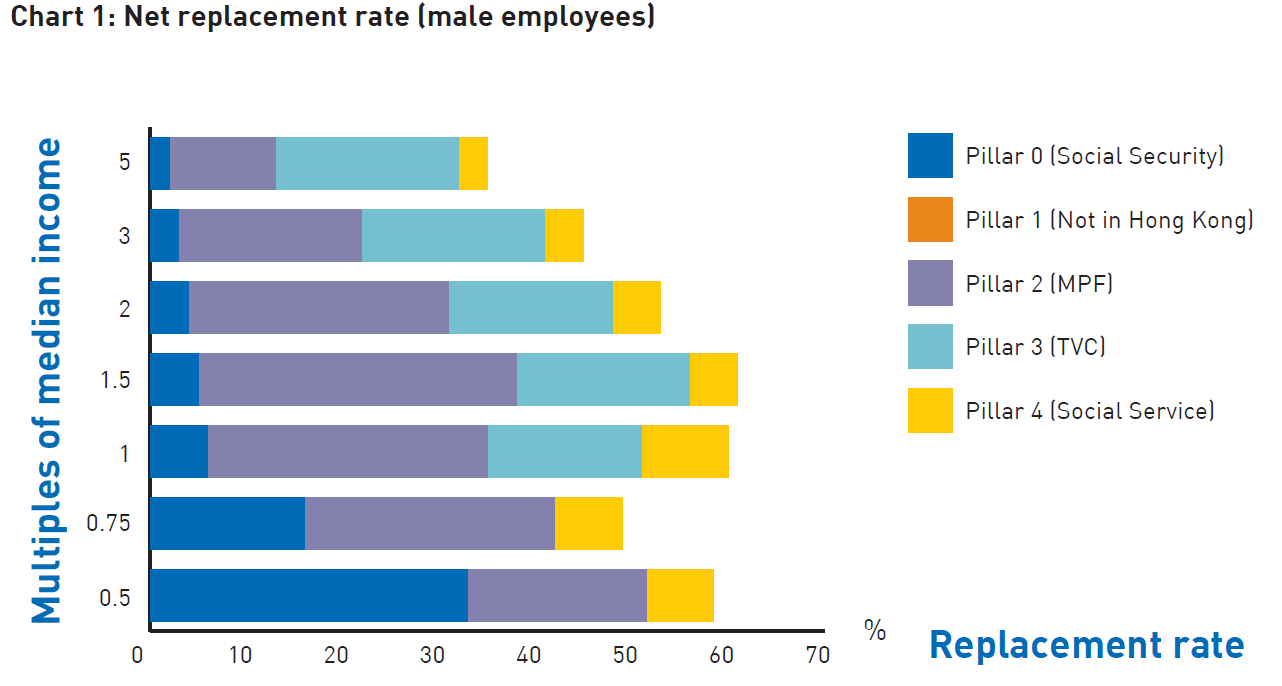 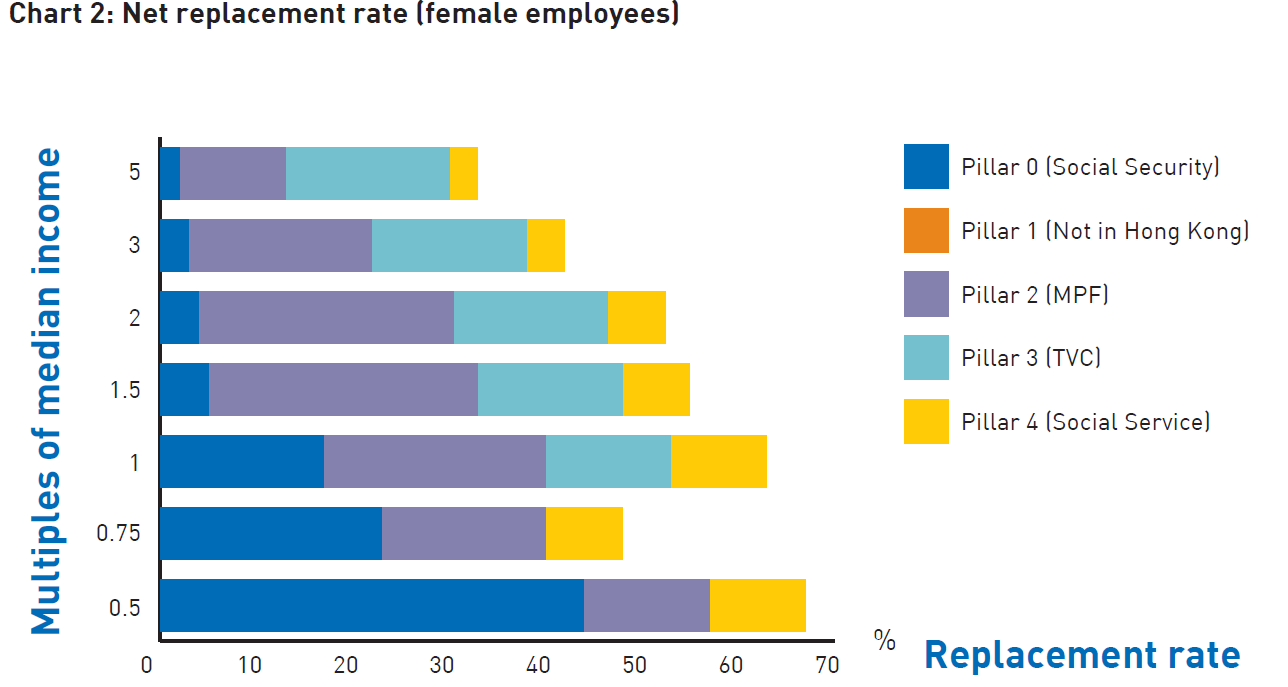 Under the current retirement system, most respondents felt that they would not have enough retirement income. The majority of these pre-retirees had no clear plan of retirement, and expressed that they wanted to work as long as they could. Given their asset and income positions, the middle-income employees will not be eligible for the Old Age Living allowance (OALA) introduced in 2013, with which over 90% of the recipients receive $3,815 a month. The only social security income, i.e. Old Age Allowance (OAA) or “fruit-money”, will be available to this income group when they hit 70. The current monthly allowance of OAA is $1,475, and is also non-means tested. The social security pillar will provide around 5% replacement rate for male employees, and up to 15% for female at the lower-end of this income range. Furthermore, the social services (fourth pillar), which includes health care vouchers, travel subsidy, and assumed payment from children, will provide an additional 6% to 10% in replacement rate.

MPF constitutes the most important retirement pillar for this income group. For a career-long contribution, retirees can expect a replacement rate of 20% to 35%. These major pillars will provide a total of 38% to 45% of replacement rate. Women would have less because they have longer life expectancy, which reduces the nominal monthly income generated from the MPF account (Charts 1 and 2).

The Government has introduced two tax-deductible voluntary retirement plans in recent years. If employees make the Tax-deductible Voluntary Contribution (TVC) under MPF throughout their career, there will be an additional 12% to 18 % in replacement rate. Bundled together, they are likely to have a retirement income close to 60% of their original one. This will allow them to maintain a living standard closer to the preretirement level. This is also the level enjoyed by most retirees in other developed economies.